Non-standard analysis and its applications 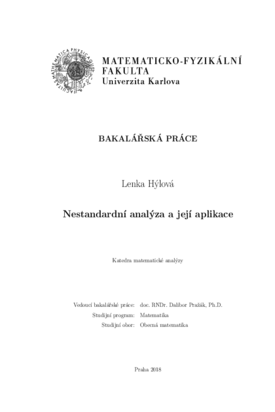 The aim of this thesis is to apply methods of nonstandard analysis on the topic of strong derivative. First of all, we sum up basic knowlegde of nonstan- dard analysis, we introduce some nonstandard definitons (such as continuity, derivative, . . . ) and we prove the equivalence of standard and nonstandard definitions. In the second chapter we introduce the notion of strong derivative (in both standard and nonstandard way) and we prove rules for its computing and some basic properties. For example, if a function has strong derivative at some point, then it satisfies a Lipschitz condition in a neighbourhood of this point. In the final part of the thesis we define strong partial differentiability and we prove the theorem which claims that the existence of partial derivatives of a function from R2 to R with respect to both factors, one of them strong, implies the existence of a total derivative. 1