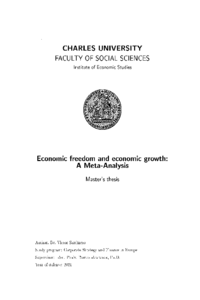 Corporate Strategy and Finance in Europe

The association between economic freedom and economic growth has been largely explored by researchers and the overall ndings indicate a signi cant and positive relationship. The empirical literature, however, is subject to suer from bias. In this paper we collect 16,070 estimates from 69 studies and using recently developed meta-analytic techniques investigate the eect of publication and speci cation biases on the reported results. While our baseline analysis re- ports some evidence for publication bias, but not very strong and robust, and con rms the speci cation bias reported by previous reviews, we also nd that these results are aected by the inclusion of three in uential outliers in the data set. Once we trim these studies, there is no evidence of speci cation bias anymore and we nd evidence of a robust and strong publication bias. Further, after controlling for the bias, we nd that the true eect of economic freedom on growth is substantially smaller than the eect reported by the empirical literature. JEL Classi cation O43; P10; P12; C52 Keywords 'economic freedom', 'economic growth', 'publi- cation bias', 'speci cation bias', 'meta-analysis' Title Economic freedom and economic growth: A Meta-Analysis