Verbal Valency in a Cross-Linguistic Perspective 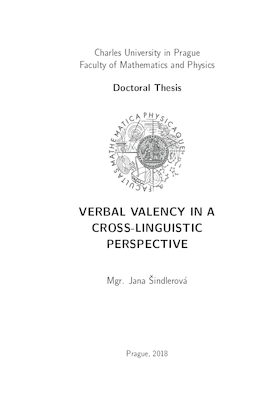 Verbal Valency in a Cross-Linguistic Perspective Jana Šindlerová Abstract In the thesis, we look upon differences in argument structure of verbs considering the Czech language and the English language. In the first part, we describe the process of building the CzEngVallex lexicon. In the second part, based on the aligned data of the Prague Czech-English Dependency Treebank, we compare the valencies of verbal translation equivalents and comment of their differences. We classify the differences according to their underlying causes. The causes can be based in the linguistic structure of the languages, they can include translatological reasons, or they can be grounded in the character of the descriptive linguistic theory used.