Performative Power and Terrorism in Europe in the 2010's

Performative Power and Terrorism in Europe in the 2010's 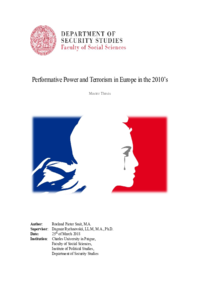 This diploma thesis called 'Performative Power and Terrorism in Europe in the 2010s', deals with the evolution of terrorism, counterterrorism and the use of the theory of performative power, as coined by Beatrice de Graaf in 2010. Since the recent attacks in Paris (13th of November 2015) and Nice (14th of July 2016), terrorism has become a hot topic again for both scholars and policymakers. De Graaf has provided a schedule of fourteen signifiers in order to measure the performativity of authorities, and the extent to which they are capable of influencing public fears and opinion when it comes to terrorism. A schedule that should concretise the way in which theory can be 'translated' to practice. By means of two case studies, regarding the terrorist attacks mentioned above, the theory and its signifiers will be analysed. The result of this analysis was stunning. This paper argues the theory and the signifiers are partially flawed and anachronistic. Although De Graaf considers her theory to be universal, the research conducted in this document reveals shortcomings and proves it does not stand the test of time. In order to make performative power and the signifiers time-resistant it has to be altered. Recommendations are therefore provided at the end of this paper.