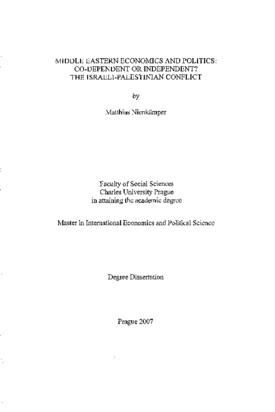 The Israeli-Palestinian conflict has captured the attention of generations throughout the decades following World War II. What are the sources of this conflict? What are the reasons behind "La revanche de Dieu ", especially in the Arab world? This thesis is providing the reader with an historical, social, and economical analysis of major determents that are often times neglected when addressing the modem Middle East. The aim is to give an understanding of what is a personal relationship to a region that will have an influential role in the future of international politics. The current U.S. administration is facing ever growing resentment in the Arab world; curing the roots and pressuring the influential factors that hinder the successful implementation of a peace process could change the perception of America amongst Arabs and Muslims around the world. A destabilized Middle East is of no benefit to the Western powers, both politically and economically. The economic benefits for both the Arab world and the West are of enormous magnitude, ignoring the potential of the Middle East is thus grossly negligent. This thesis is providing a condensed overview of the main obstacles facing the Israeli-Palestinian conflict and the modem Middle East.