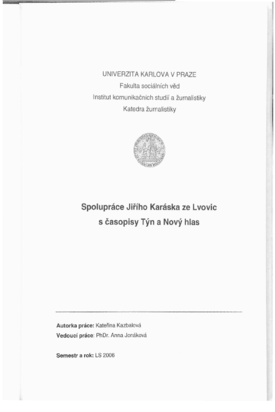 Jiří Karásek ze Lvovic, a typical represenative of Czech literary Decadence, was not only a poet and a prosaist, but he also cooperated with several journ als. In addition to the Modernf revue, that he founded in the mid-1890s and which became a centre for the contemporary artistic avantgarde, he also particip ated in the editorship of two entirely different periodicals. The Tyn (1917 -1921) was a catholic journal, the Hlas (1931-1934) was a journal of the Czech homosexual minority. It was the aim of my study to explain the reason why he worked in these dissimilar periodicals, and what kind of cooperation this was. I was also interested in how much both of these journals and their orientation do form a part of the image of Jiří Karásek ze Lvovic. Powered by TCPDF (www.tcpdf.org)