Materials for Solar Cells Based on Thin Silicon Films 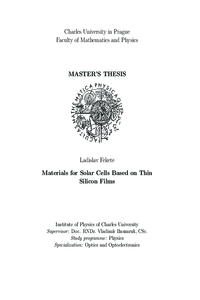 Institute of Physics of Charles University