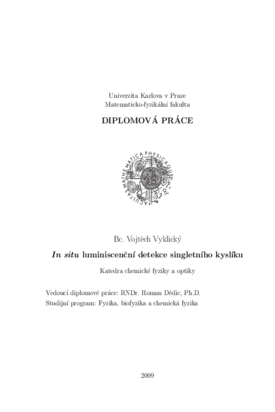 Department of Chemical Physics and Optics

The thesis summarises already published results of singlet oxygen luminiscence detection in relation to photodynamic therapy treatment. The spectroscopic and photosensitising properties of the photosensitizer TMPyP and their comparison with already published properties of TPPS4 are presented. Also the inuence of phosphatidylcholine on photosensitising properties of TPP and singlet oxygen lifetime was investigated. The thesis is mainly focused on adaptation and optimisation of experimental setup for singlet oxygen luminescence deteciton from the surface of solid samples with time and spectral resolution using optical fibres with luminescence probe. The usability was tested on polymer matrix (PMMA or polystyrene) containing protoporphyrine IX. Finally, the kinetics of singlet oxygen phosphorescence measured from surface of thin layer of 3T3 murine fibroblasts containing TPPS4 or TMPyP are presented. Thereby the feasibility of singlet oxygen detection in situ was demonstrated using this setup.