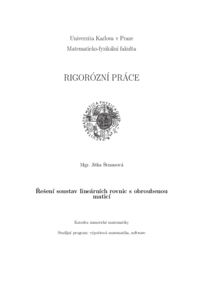 The comparison of two algorithms for solving bordered linear systems is considered. The matrix of this system consists of four blocks (matrices A,B,C,D), the upper left one is a sparse matrix A, which is ill-conditioned and structured. The other blocks (B,C,D) are dense. We say that the matrix A is bordered with the matrices B,C,D. It is desirable to preserve the block structure of the matrix and take advantage of sparsity and structure of the matrix A. The literature suggests touse two different algorithms: The first one is the method BEM for matrices with the borders of width equal to one. The recursive alternative for matrices with wider borders is called BEMW. The second algorithm is an iterative method. Both techniques are based on different variants of the block LU-decomposition.