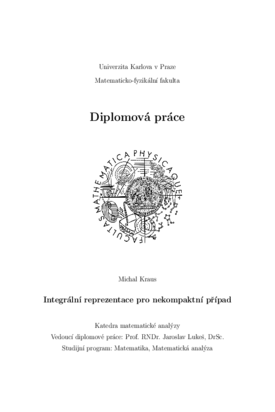 Classical Choquet's theory deals with compact convex subsets of locally convex spaces. This thesis discuss some aspects of generalization of Choquet's theory for a broader class of sets, for example those which are assumed to be only closed and bounded instead of compact. Because Radon measures are usually defined for locally compact topological spaces, and this is not the case of the closed unit ball in a Banach space of infinite dimension, there are used the so called Baire measures in this setting. This thesis particularly deals with the question of existence of resultants of these measures, with the properties of the resultant map, with the analogy of Bauer's characterization of extreme points and with some other concepts known from compact theory. By using some examples we show that many of these theorems doesn't hold in noncompact setting. We also mention forms of these theorems which can be proved.