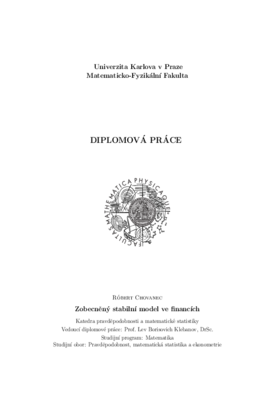 In this contribution, a basic theoretical approach to stable laws is described. There are mentioned some definitions of the stable distributions, properties and behavior of stable distributed random variables. Next, conditional modeling under the stable laws are analyzed. One can find homoskedastic (ARMA) and heteroskedastic (GARCH) structures. The GARCH models are explained partly for the Gaussian case too. An empirical application of this paper is based on comparison between the models, established in theoretical part, under the normal, and stable distribution respectively, built on real data from energetics. One issues from unconditional, then continues with conditional ARMA and finally, there are mixed ARMA-GARCH models. The results of interpreted statistical analysis demonstrate that the models based on the stable distribution matched the empirical distribution better than the the models based on the Gaussian distribution.