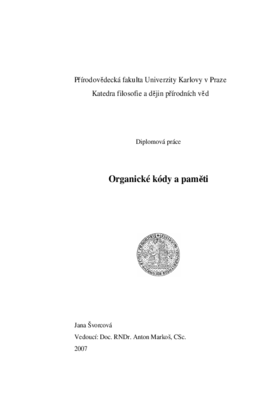 Department of Philosophy and History of Science

5 Abstract The backgrounds of Marcello Barbieri's semantic biology and the semiotic biology are confronted in the issue of autonomy of living systems. In the place of an interpreter in Pierce's triad, in Barbieri's case there stands a code. Although both concepts attribute important status to the meaning in biology (which is left out outside the scope of semiotic tradition), both concepts are by definition different in the way of apprehension the nature of living systems and of basic biological ideas. Codes are considered to have fundamental status in Barbieri's concept. From this point of view the analysis of histone code hypothesis seems to be appropriate. Can we say (according to our today's scientific knowledge) that histone code truly fulfills demands of Barbieri's concept of codes? Another Barbieri's idea of epigenesis functioning on the basis of biological memory can be unfolded not only thanks to analysis of the phylotypic stage's role, but also by similar analysis of the homeotic genes' role in morphogenesis of vertebrates, because even these genes can be regarded as biological memory of species. These analyses will lead us step by step to the negation of the thesis "cultura contra natura".