The Mexican War on Drugs: an analysis of the militarised approach and its consequences

The Mexican War on Drugs: an analysis of the militarised approach and its consequences 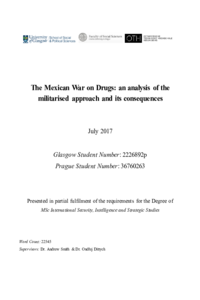 t r| I rI t I T r| r| rl t r| t rl t t t I t I Abstract The following research analyses the impact of the War on Drugs in Mexico. Albeit acknowledgin:g the importance of the United States in the counter-narcotic efforts, the research is focused on the actors that:experienced the conflict in the first place: the Mexican state, the cartels and the Mexican population. The research exits the realist perspective and discusses the case study from a constructitist point of view, with afocus on the securitisation of the narcotic aspect. The research concludes that, despite a decade long conflict, organised crime is still present. The War on Drugs strateg) did not manage to respect the initial promise of dismantling drug cartels and instead pushed them towards a structural and territorial fragmentation as well as hyper-militarisation. Moreover, the rigid approach led to a diversification of illicit activities which are currently a direct threat for human security. The finat results show that organised crime has high probabilities of surviving due to several key-factors: economic resources, violent mean$ corruptible legal actors, a constant demand of illicit goods and ungoverned spaces. Key words: "war on drugs",' "Mexico"; "kingpin"; "cartel"; "narco"