The dynamic of recent slope movements in the area of Jezeří in Krušné hory Mts. 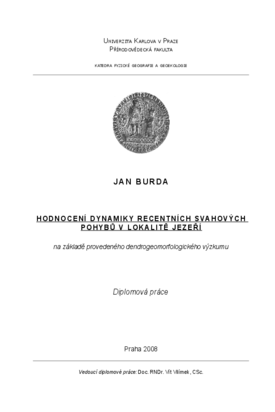 Department of Physical Geography and Geoecology

Diplomová práce: Hodnocení dynamiky recentních svahových pohybů v lokalitě Jezeří A B S T R A C T The object of this study is geomrphological research in natural hazardous area around Jezeří castle in Krušné hory Mts. This paper studies dynamics of mass movement in geologically and geomorphologically problematic area, where mining glaciate high up into the southeast-facing slope of the Krušné hory Mts. This paper presents results of dendrogeomorfological research. Trees reflect geomorphic processes in variety ways. Mass movemets often causes inclination of the tree trunk, this curvature is caused by the presure of reaction wood. We report results of 89 cores from 35 severely tilted trees (Fagus sylvatica). For reasons of sample depth, the analysis was limited to the period 1900-2006. In this period was accounted growth disturbances - excentricity of annual rings and sudden growth changes. This study presents results of correlation between growth disturbances and precipitations. The mass movemnts dynamic (creeping of quaternary sediments) is affected by precipitations. Significantly low mass movements "rates" can be observed during the 1940s and 1990s. In contrast, high mass movements "rates" were identified during the 1900s and the end of 1950s and during the 1970s. 4