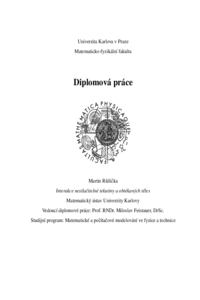 Mathematical and Computer Modelling in Physics and Engineering

The subject of this thesis is the numerical simulation of the interaction of two-dimensional incompressible viscous flow and a vibrating airfoil. A solid airfoil with two degrees of freedom, which can rotate around the elastic axis and oscillate in the vertical direction, is considered. The numerical simulation consists of the finite element solution of the Navier-tokes equations coupled with the system of ordinary differential equations describing the airfoil otion. The time dependent computational domain and a moving grid are taken into account with the aid of he Arbitrary Lagrangian-Eulerian (ALE) formulation of the Navier-Stokes equations. High Reynolds umbers up to 106 require the application of a suitable stabilization of the finite element scretization. Numerical tests prove that used method is sufficiently accurate and robust.