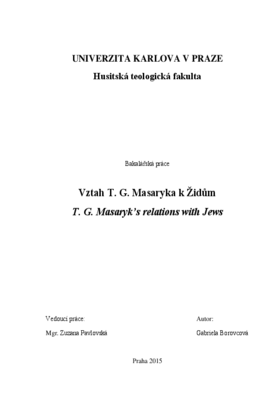 1 SUMMARY In my thesis I have attempted to describe and assess Masaryk's attitude to the Jews and to judaism. I have strived to describe the reality as objectively as possible basing on historical and secondary sources. Masaryk's attitude to the Jews must have gone through a certain personal development; however, it does not show many turns. His childhood was influenced by the anti-Semitism of that age. In Masaryk's case, anti-Semitism was connected especially to his mother who was prejudiced this way and who naturally influenced him. In my opinion, Masaryk's attitude to anti-Semitism became nevertheless defined during his maturing. The teenage and adult Masaryk definitely cannot be marked as an anti-Semite. However, he cannot be called a philo-Semite, either. Masaryk was a real democrat and a proponent of civil society, i.e. of a world where there is no place for any prejudice of the estates. As such he was necessarily egalitarian towards the Jews, too, who he understood in a very modern way as a nationality. Masaryk saw the Jews as humans first of all, only then as a nationality, a nation or a religious group. The scientific character of his attitude manifests itself also in the Hilsner case where Masaryk attempts by all means to disprove the ritual murder theory.