Interest rate pass-through in the Eastern Europe: Case of Albania - An empirical Analysis 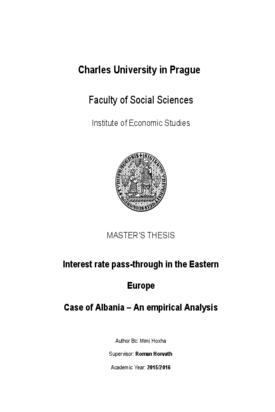 The study of interest pass through has been on the core attention of researchers since it serves as an incentive to evaluate the accuracy of monetary policy transmission mechanism. Therefore there are a lot of studies conducted under this topic encompassing a large number of countries and data. My aim, inspired by the great previous works, is to develop the same topic but by focusing on Balkan countries and more specifically on Albania. Being a developing country located on the heart of Balkan while aspiring the EU integration, Albania has gone under a considerable number of economic reforms which are also reflected on the degree and speed of transmission of policy rates to landing rates and on the determinants of such rates. Crisis of 2008 had a global impact but yet several conducted studies revealed that Albania was not directly affected by it. My contribution to this thesis consists in measuring how the pass-through mechanism performance was affected by the crisis and the implications derived from it. Powered by TCPDF (www.tcpdf.org)