Global Spillover Effects from Unconventional Monetary Policy During the Crisis 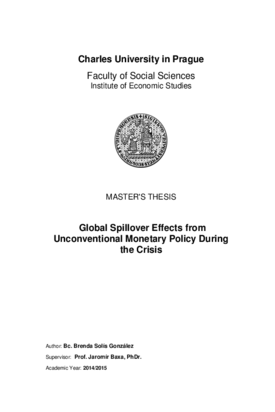 This work investigates the international spillover effects and transmission channels of Unconventional Monetary Policy (UMP) of major central banks from United States, United Kingdom, Japan and Europe to Latin-American countries. A Global VAR model is estimated to analyze the impact on output, inflation, credit, equity prices and money growth on the selected countries. Results suggest that indeed, there are international spillovers to the region with money growth, stock prices and international reserves as the main transmission channels. In addition, outcomes are different between countries and variables implying not only that transmission channels are not same across the region but also that the effects of the monetary policy are not distributed equally. Furthermore, it is found evidence that for some countries transmission channels may have transformed due to the crisis. Finally, effects of UMP during the crisis were in general positive with exception of Japan indicating that policies from this country brought more costs than benefits to the region. Keywords Zero Lower Bound, Unconventional Monetary Policy, International Spillovers, Global VAR, GVAR.