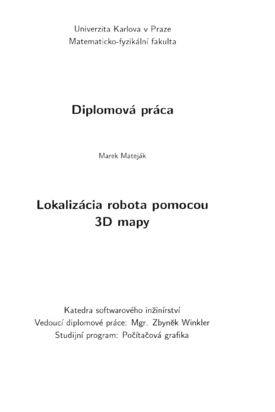 This thesis deals about possibilities of autonomous mobile robot localization by camera in the known environment. In detail the model is analyzed of scene representation by perspective projection including evaluation of the location according to paired points with the scene. This is done especially for the model of the robot with the fixed camera location that moves on the fiat floor. Localization is analyzed from two points of view. From the global view, where is the goal to evaluate position without previous knowledge of the position. And from the local view, where is the location of the robot tracked during its movement in the scene. In the first case is estimation of the position based mainly on the color separation of segments. The case of undistinguishable reference points is analyzed, where the position is estimated according to their field location. On the other hand, when the previous position is known, the two methods of reference points tracking are mentioned. First method is ICP algorithm, which makes the registration of points. The second is the Mean Shift algorithm for tracking image seg1nents. In the end is mentioned the application of Monte Carlo filtration, which assures robustness of segment tracking. Powered by TCPDF (www.tcpdf.org)