Humans and the World of Work 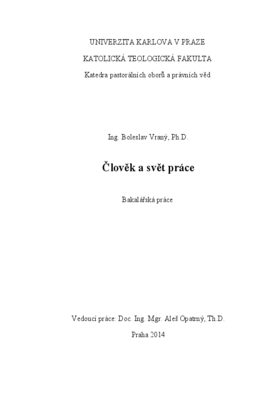 1 Bachelor thesis "Humans and the World of Work" examines the relation of spiritual life and daily work, as well as the possibility of connecting them. It understands "work" as an employment or entrepreneurial activity in contemporary professions not limited to the caring professions. It starts by formulating a hypothesis that such a connection is possible which is consists in the development of virtues, viewing work as participation in God's work of creation and redemption and as participation on the mission of Christ as Priest, Prophet and King. It compares this hypothesis with the teachings of Gaudium et Spes, Pastoral Constitution on the Church in the Modern World of the Second Vatican Council, the social encyclicals, and the Compendium of the Social Doctrine of the Church. In the doing so, it also documents the development of their understanding of work during time. In concludes that the hypothesis is confirmed by them a goes on to describe several common types of connecting spiritual life and work, as found in literature. It also dis- cusses the relation of the theological and cardinal virtues to spirituality of work.