Effects of the Integration of Balkan Countries with the EU 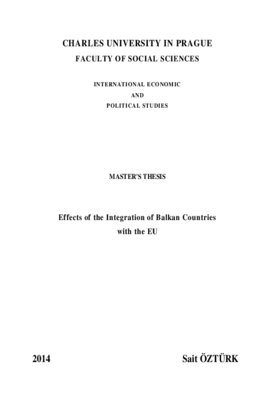 1. Abstract: The EU and Balkans are approaching each other every coming year. The borders of the EU would like to welcome the rest of Balkans as it welcomed Romania and Bulgaria in 2007 and Croatia in 2013. Their accession to the EU was an interesting research topic for many academicians. In nowadays Bulgaria and Romania have certain problems with the EU. The aim of this paper is to indicate the economic effect of the EU membership for Western Balkan countries. In order to demonstrate this effect, EU member states of Western Balkans and other potential candidate countries of Western Balkans are observed in two different chapters. The advantage of the EU membership and EU integration period for Western Balkan countries were shown with various statistics, cross country analyzes and country reports. On the other side the negative side of the current Western Balkan`s economies is pointed out using similar sources. As last it was shown that the sign of being protected under the EU umbrella makes member states idle after one two years of their accession and that has a huge long term cost for the Union.