Cross-Border Contagion in the Banking Sector: The Case of Nordic Countries 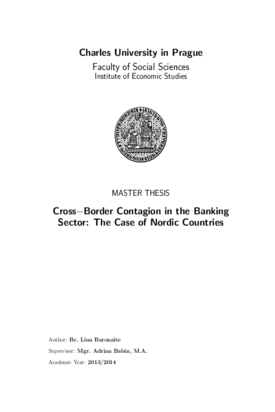 "Cross-Border Contagion in the Banking Sector: The Case of Nordic Countries" by Lina Baronaite Abstract: The objective of the thesis is to estimate the degree of cross-border contagion among the Nordic banking sectors. It analyzes a sample of sixteen largest listed Nordic banks from January 2004 to January 2014. Using a multinomial logit model we test whether there is any degree of contagion among the four banking sectors, whether it is more pro- nounced for larger banks and whether the recent financial crisis has exacerbated it. Our results are in line with similar studies conducted for other countries. In particular, we find that a shock in one bank- ing sector is positively associated with an increase in shocks in another banking sector. Second, these shocks are larger and more significant for larger and more active international banks. Finally, the effect of the recent financial crisis has ambiguous effects on the cross-sectoral banking contagion. It appears that contagious links between some sec- tors weakened (Sweden and Denmark, Sweden and Finland). Other economies (Sweden and Norway) on the contrary became more depen- dent on each other. The results are robust to a wide variety of changes in specifications.