Overview of Foreign Aid in the Balkan Countries: Selected problems 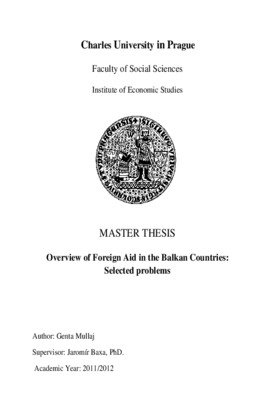 This study attempts to ascertain the role of the World Bank and its problematical issues in Balkan countries. The foreign aid holds a key impact in these economies, but on the other hand it embraces a controversial aspect. The contradictory role of the World Bank lies in aid ineffectiveness at reducing poverty and sustaining economic growth. The foreign aid inflows did not manage to fulfill its objectives efficiently, since they created income inequalities in the region favoring distinctive economies. Corruption and bad-governmental management would expand the controversially further. Additionally, the study analyzes the impact of aid on economic growth empirically using a panel data set comprising of five Balkan economies during 2000-2010 period. We find negative and significant evidence of aid impact on growth. Moreover, the relation between governance and growth resulted positive. Results display a clear framework of aid ineffectively across the region. The Balkan countries should therefore focus on a better effective management of the World Bank aid to reduce poverty, income inequality and to achieve the economic growth.