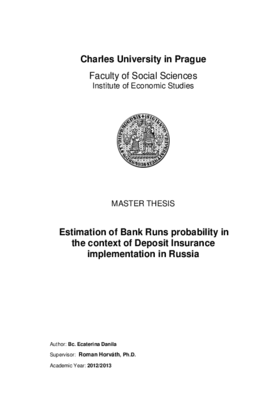 This thesis empirically investigates the bank runs probability cases over the period 2005-2011 on Russian banking market and, simultaneously, tests the hypothesis of influence of bank-fundamental factors and macroeconomic conditions on the decision of depositors to withdraw their funds from banks. Methodologically, was conducted a logit econometric model to test our assumptions. We find evidence on both bank- fundamentals, such as high debt ratio, rising real interest rates, small asset size, and macroeconomic conditions, such as high inflation, and sharp increases in the real exchange rates, to influence on bank runs. In addition, the thesis analyzes the significance of deposit insurance implementation in avoiding bank runs. Moreover, we compare if the newly adopted deposit insurance diminished the credibility of the depositors in the state-controlled banks compared with private banks, thus, increasing the amount of investments to private banks. Finally, based on our approach, the method identifies a run on Russian deposit market during quarter four of 2008 year; however we would not characterize it as a severe run because it did not touch all banks but more as a partial one (approx. 1/3 of banks from the system were affected).