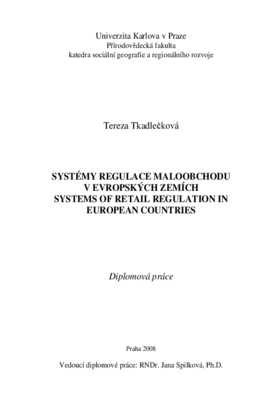 8 Abstract This thesis contributes to debate on retail development regulation in European territory. The aim of the text is firstly to evaluate differences between instruments that are used to standardize retail development in Europe. Secondly, point out relevance of rules existence to control retail spread. And thirdly elaborate a scheme of typology according to present valid limits in selected countries. The field survey is divided into two parts. It is primarily focused on modern developing period, interprets basic changes and trends of current situation and atractivity of particular regions for next development. Attention is also paid to describe general impact of assessing influence on environment by retail development. As an output of this work is division countries into groups by analysing their system of legislative restriction's structure and mechanisms of commercial planning. Five categories were described by chosen characteristics. One of the characteristics is the relation between competences in hierarchical levels of state authorities. Another example is differences in allocation of decision making in developing process. Keywords: retail impact assessment - commercial planning - regulating indicators