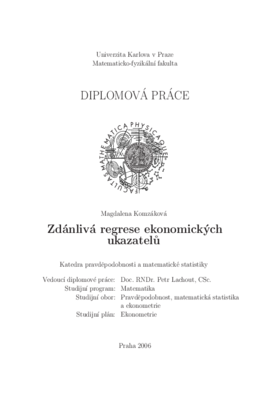 In the time series analysis it often appears that two or more time series influence each other. When the generating stochastic processes of these series do not have stationary structure but they are stochastically non-stationary, i.e. the characteristic polynomial has a unit root, it happens that the regression modelling the dependence of some absolutely independent series gives statistically significant parameter estimations and statistics used to judge the model fitting do not indicate anything about its impropriety. This phenomenon is called seeming regression (spurious regression) and is solved with the theory of cointegration. We can say that when the series are cointegrated, their model shows their real dependence, not only the seeming one. Due to this fact, cointegration tests are also used for testing for the presence of seeming regression. These tests are based on unit root tests in generating process (or on stationarity tests), because time series can be cointegrated only if their linear combination is a stationary series.