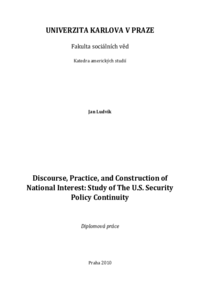 The following study has been deeply inspired by growing bulk of postmodern scholarship. The basic logic behind this study comprises of the assumption that the fundamental structures of international politics are social constructs constituted in the processes and practices of dealing with them. Ultimately the text below offers problematization of several concepts of the American security policy believes that are usually more or less taken for granted. Working within this notion, common knowledge must be understood as the problem itself. Meanings we ascribe to various terms are in fact product of previous experiences, shared believes, and culturally contingent images that has been constituted through various practices in dealing with them. The following study thus further elaborates the concept of the national interests and of the relation between national interests and threats