The projection of population mortality tables 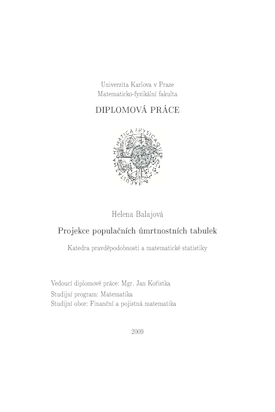 In the present work we deal with the problem of projecting mortality. At the beginning we describe the life table and we classify the methods and models (parametric models, non-parametric models, models based on reduction factors). The Lee - Carter method is described in detail. We focus on forecasts for a group of countries. We show existence of common trend in mortality in Europe and its disappearance. We assume that demograpahical characteristics of di erent countries with similar socioeconomic conditions will converge in the future. We apply this assumption using the augmented Lee - Carter model, in which selected countries have same trend in mortality as a group with lower mortality, and using Broekhoven approach, which determines that the mortality in given year in the future will be the same as in chosen group. In the last chapter we apply these methods in Central Europe.