Changes of rainfall-runoff conditions in the Upper Opava River basin 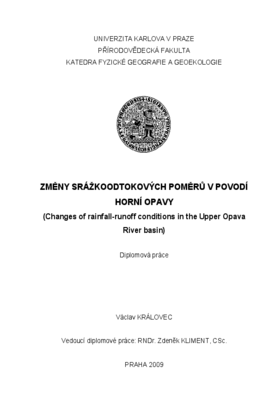 Department of Physical Geography and Geoecology

The rainfall-runoff process is a natural event affecting a landscape. There are many factors which make that process difficult to understand. The factors are closely connected and so we have to think about the wide-contexts between them. This thesis pays attention to the variation of rainfall-runoff conditions in the Opava and Opavice river basin down to the gauging station Krnov. In the last 50 years there are observed partly the influences of climate oscillations and changes in the rainfall-runoff process and partly the potential human influence. This thesis is also solving the question of testing the homogeneity of the time series. Some statistical tests, which were already used in other projects, were used for that. On the basis of time series analysis of rainfall, air temperature and snow cover is endeavoured to analyse the changes and to establish significant trends in each climate features. On the top of that there is made the analysis of land use changes and land drainage analysis, which is the complement of climate change analysis. Powered by TCPDF (www.tcpdf.org)