Authority and apostasy: the Barcelona disputation in the context of thirteenth-century Jewish-Christian polemics 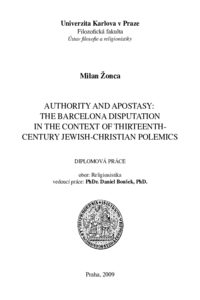 The present work examines the Barcelona disputation of 1263 between Namanides and Friar Paul Christian in the context of Jewish-Christian thirteenth-century polemics. The text considers far-reaching changes in Christian "hermeneutical image" of a Jew in the course of the twelfth and thirteenth centuries, and attempts to connect them with the deteriorating situation of western Jewry in that period. Analyzing the Barcelona disputation itself, this work concentrates on two most distinctive traits of thirteenth-century polemics: the activity of apostates and questioning the legitimacy of Jewish post-biblical textual and communal authorities. Looking closely at the ways these questions were addressed by the participants, it is suggested that internal Jewish issues, such as the quest for correct interpretation of Talmudic aggadah or power struggles for authority influenced, through the mediation of apostates like Paul Christian, the polemical methodology and anti-Jewish imagery of medieval Christians in that period. It also suggests that Namanides, on the other hand, was in his polemical narrative not only refuting Christian claims, but trying to offer a commentary on contemporary Jewish questions as well.