Planets by Other Suns 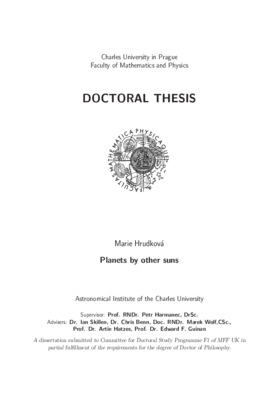 Exploring distant planetary systems can help us to understand our own. In this thesis, two methods are further investigated for this purpose. First, to detect Earth-mass planets highaccurate measurements of radial velocities and also accurate barycentric corrections are needed. The program for computing these corrections was developed. The accuracy achieved is few cm s1 and hundredths of s for radial velocity and time corrections, respectively. The program was used to compute barycentric corrections of the 51 Peg system, for which measurements with the 2-m Alfred-Jensch Telescope were taken and analysed. Second, the method of planetary transits was used for a transit timing study of two transiting exoplanetary systems, HD 189733 and TrES-1. The data were taken with the 4.2-m William Herschel Telescope and the 2.6-m Nordic Optical Telescope, La Palma. The program using the Markov-Chain Monte Carlo simulations was written for a purpose of a transit timing study to derive system parameters, mid-transit times and their uncertainties. An additional planet in a transiting system perturbs the motion of the transiting planet, and the interval between the mid-eclipses is not constant. Deviations from the predicted mid-transit times which can reveal the presence of other bodies in the system were analysed.