The Determinants of Private Savings in the EU: The Case of the Group of Eight Entrant Countries 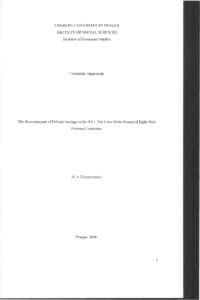 Private saving in the CEE countries can be described as having stabilised over the period of reform. Among the transition variables employed in the study, price liberalisation stands out as the most potent correlate of private saving. This is seen as a direct consequence the gradual removal of the soft budget constraint under the command system and by extension the elimination of involuntary saving. Another remarkable outcome from the GMM model is the positive response of the first lag of private saving which demonstrates persistence of savings in the CEE over the transition period. Tied to this is the strong response of private saving to sound macroeconomic discipline in the CEE countries. This is evidenced in the positive response to key variables like GDP growth and improvements in the terms of trade. Most importantly, the aged dependency ratio is seen as the most consistently strong influence on private saving. This brings to the fore the role of pension reforms in these countries and its impact on public and private funds. Keywords: Central and Eastern Europe, EU, Private Saving, Stabilization, Transition. 5