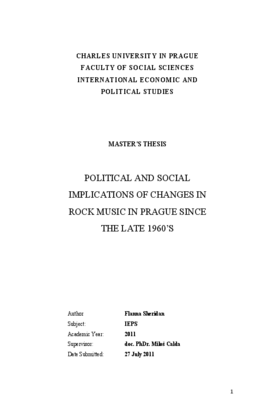 Music has played an important role in the political and social developments in former Czechoslovakia and the Czech Republic over the past 40 years. The underground movement that was born during the 1960's and 1970's and its younger cousin the alternativa movement have had a substantial impact on the perception of Czech society and its political scene as well as influenced several generations of listeners. It is often considered to have heavily contributed to the events leading up to the Velvet Revolution. In the 1980's, it drew criticism from the state for facets such as language. The 1990's brought a vast amount of international music and commercialization, though it is important to note underground trading of international music was very strong even before the Velvet Revolution. Czech music may have shifted toward an apolitical role, but the power of musical movements have been proven by the lessons of the past. The political role may be have been inadvertent, but no t inert. Its role is to be taken into consideration in the events that took place during up until 1989. The purpose of this paper is to attempt to better understand the role of music in Czech society, specifically the underground movement, in its effect on society and politics.