The spiritual life of a lay male. Theological and psychological base, social transformations and expectations 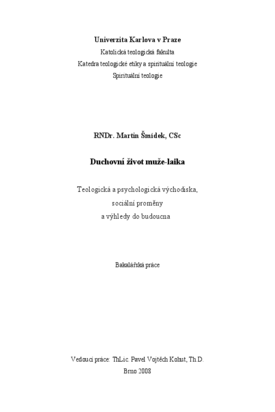 Department of Dogmatic and Fundamental Theology

Title : Spiritual life of a male laic. Theological and psychological base, social metamorphosis and expectations. Keywords : male spirituality, masculinity, marriage life, gender studies, spiritual theology. Annotation : Spiritual life of a man living in a marriage is explored from various points of view. Studying biblical narratives about the creation of man showed constitutive differences between male and female, as well as their special symmetry connected with life roles. Differences in Jesus' behaviour towards a man or a woman were observed and classified. Notion of "social womb" used in family psychotherapy was generalized to suit the description of a male spiritual life in the context of a marriage and family life. Metamorphosis of a father's status in history was briefly shown and focus was made on contemporary situation. Influences of feminism and gender studies were also explored. Statistical surveys showing significant diminution of Christianity in the Czech Republic lead to the idea of "latent spirituality" which was proposed for the sake of possibility to study the early stages of a male's belief. Examples of feedback loops among biological, psychological and spiritual processes were shown in their positive and negative roles.