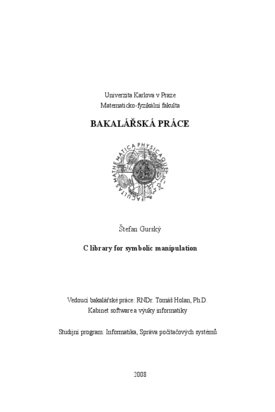 There are many programs doing symbolic manipulation with mathematical expressions. They are called Computer Algebra Systems and most of them contain some programming language. In this bachelor thesis a library for C programming language was created that allows using C as a language for symbolic manipulation. With provided functions user can store mathematical expressions in C variables and work with them in an easy and convenient way. It is possible to build expressions containing standard mathematical operations and functions, reduce them, expand them, find derivatives and Taylor polynomials. The library (called SymCe) is easy to understand not only for user, but also for a programmer that wishes to see its inner working and possibly extend it. Simplicity is the main feature that distinguishes SymCe from other similar pieces of software.