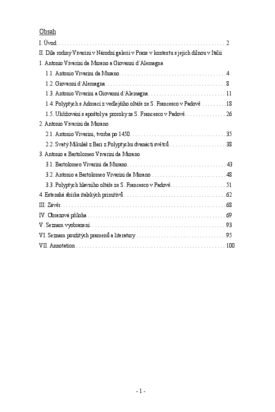 Paintings by the Vivarinis in the National Gallery in Prague in the context with their art workshop in Italy In the National Gallery in Prague is artistic represented Muranese school in the works of Antonio Vivarini da Murano, which cooperated with his brother-in-law Giovanni d'Alemagna on the Polyptych with Adoration in 1447 and on the Crucifixion around 1448, for Franciscan church of San Francesco in Padua. They worked on the decoration of Ovetari Chapel here. Giovanni d'Alemagna died in 1450, after that Antonio cooperated with his younger brother Bartolomeo Vivarini da Murano on the Polyptych for main altar of the Church San Francesco in Padua in 1451. Parts of polyptych are found in the National Gallery in Prague, in Kunsthistorisches Museum in Vienna, in private collection of Vittorio Sgarbi in Ferrara and two parts are lost today. Alone Antonio pinxit one figure of St Nicholas of Bari in the Pseudo-polyptych with twelve saints, that is attribution to Lovro Dobričević now. Paintings by the Vivarinis got off into the Prague from d'Este collection in Konopist, which works acquired from inheritance of Tommaso degli Obizzi of Catajo near Padua in 1805. Keywords: Vivarini da Murano, d'Alemagna, Padua, Crucifixion, Adoration, Pseudo-polyptych.