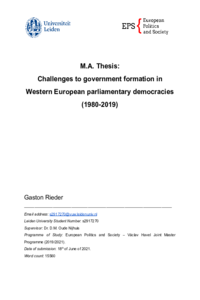 This thesis aims to understand the reasons behind the increase in the duration of government formation negotiations in Western Europe. It argues that there is a gap in the existing scholarship on this issue. On the one hand, scholars have noted that party systems in the region have undergone profound changes over the last decades, and particularly since the 2008 financial crisis. On the other, the effect this has had on the duration of government formation has not been as thoroughly researched. In order to explain this phenomenon, this thesis expands upon the survival analysis literature, by means of applying recent innovations to the Cox proportional hazards model, such as the Cox with Expected Durations package (Kropko & Harden, 2017, 2020). All in all, the results show that longer government formation processes can be attributed to two main phenomena: the rise in parliamentary fragmentation, and the rise in less stable legislative types as per the typology outlined by Laver and Benoit (2015). The findings of this thesis thus contribute to a better understanding of this crucial development in the Western European political landscape, which has wider implications for the stability of Western European democracies as a whole.