The National Politics of European Union Enlargement: The Netherlands and the scope of politicization of EU-enlargement in the national political arena 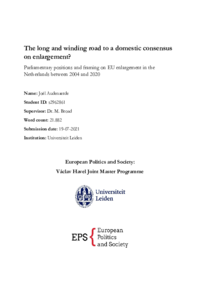 In which ways has EU enlargement been framed in national parliamentary debates? And what positions do actors take on enlargement? And finally, do partisan dynamics explain these positions and frames? This thesis provides an assessment of the debate on enlargement in the Dutch national parliament between 2004 and 2020. It aims to build upon research on the nationalisation of the enlargement policy. Are the positions of national governments similar to those of parliamentary actors? Empirically, this thesis shows that enlargement in debates has lost salience over time and that mostly positions have become more negative. In terms of framing, the debates in the Netherlands are characterised by a strong focus on pragmatic frames. Both these positions can be explained by strategical considerations; a party in government tends to emphasise pragmatic frames more so. Moreover, the cultural axis of partisan dynamics explains that more conservative parties are generally more critical of enlargement.