Russia's Wars in the Ukraine and Georgia: A parallel case study of Russia's choice to engage in the 2014 Ukraine Crisis and 2008 Russo-Georgian War 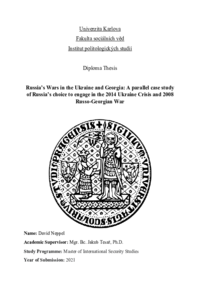 for Diploma Thesis "Russia's Wars in the Ukraine and Georgia: A parallel case study of Russia's choice to engage in the 2014 Ukraine Crisis and 2008 Russo-Georgian War" David Neppel Prague 27.07.2021 The present diploma thesis examines the reasons for the Russian Federation's military action in the 2014 Ukraine crisis and the 2008 Russo-Georgian War. The scope of research is focused on the various actors that held a stake prior to the conflicts and how these conditions in the international arena influenced Russian decision making. In this capacity, the thesis seeks to provide a comprehensive overview of the involved actors' positions and ambitions and how these impacted the eventual unfolding of events. The method chosen to conduct this work is an expected utility approach. A spatial model will be constructed in which all the information about players' preferences and acceptable outcomes is represented visually. Then an analysis will be concluded that seeks to find overlaps/discrepancies between actors' positions and will eventually determine the failure of negotiations.