Understanding Party Positions on European Integration amidst Crises: The impact of national and regional crises on political party behavior in Spain and Ireland 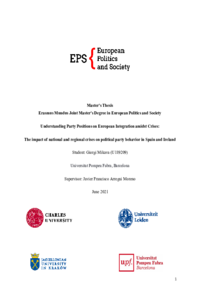 Does Brexit cause other national parties in EU member states to change their positions on European integration? Can the effect of Brexit be explained by its exceptional nature or do all crises affect political party positioning on European integration one way or another? By treating Brexit crisis as an independent variable of this study and controlling the results by comparing it to Spanish constitutional crisis and its influence on party positions, one of two things are bound to happen: political parties in other member states affected by the crises will rally behind their government stance and EU institutions, or will respond by shifting policy positions depending on success vs failure story of Brexit outcome. In an attempt to determine, how do crises affect national parties' policy positioning on European integration, it is expected that mainstream parties will remain pro-integrationists as they traditionally have, while Eurosceptic parties will choose to shift their positions on integration depending on EU's handling of the crises.