Neo-authoritarianism and Media Systems Transformation in Central and Eastern Europe 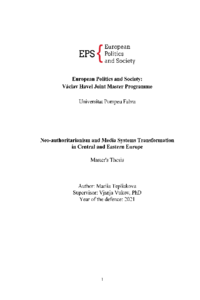 In several modern countries, media have to operate in "disabling environments" with limited journalistic freedom and judicial independence. Central and Eastern European states represent such settings to various extent, as the takeover of media regulatory organisations and decreasing media pluralism have become characteristic for this region, indicating a systemic shift. Nevertheless, the high- profile cases of Poland and Hungary could have contributed to overgeneralised conclusions regarding the nature of such transformations, attributing them to, inter alia, the rise of right-wing populism. Using the method of paired comparison, this thesis examines Poland and the Czech Republic to determine the exact mechanisms of change behind media capture in these countries. I contend that different manifestations of neo-authoritarianism in the region are responsible for manifold attacks on media independence, including sophisticated strategies of using SLAPPs, strategic lawsuits against public participation, and increasing concentration of media ownership combined with potential conflicts of interest. I conclude by suggesting directions for further research and policy-making to address media freedom on both national and European levels.