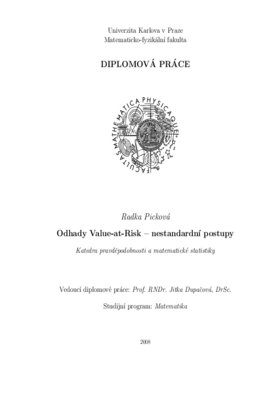 The topic of the presented work is Value-at-Risk (VaR) and its estimation. VaR is a financial risk measure and is defined as a quantile of the distribution of future returns, resp. losses. There exist various methods based on different assumptions how to estimate VaR. The most commonly used methods usually assume that the returns, resp. losses, are independently and identically distributed, especially that they are normally distributed. Since this assumption is not satisfied for most daily financial data, many alternative approaches have been suggested to estimate VaR. In the presented work two of them are discussed in detail, the CAViaR method and its asymptotic properties and the method of filtered historical simulation. One part of the work are numerical experiments with real data.