Approximation and numerical realization of contact problems with given friction and a coefficient of friction depending on the solution in 3D. 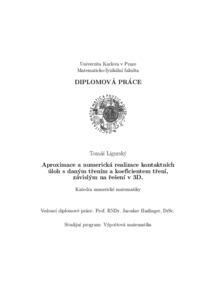 Three-dimensional contact problems with given friction and a coeficient of friction depending on the solution are studied. By means of the xed-point approach, the existence of at least one solution is proved provided that the coeficient of friction F is represented by a continuous, positive and bounded function. Under an additional assumption, namely the Lipschitz continuity of F with a suficiently small modulus of the Lipschitz continuity, the uniqueness of the solution is shown. The problem is discretized by the nite element method. The existence and uniqueness of the solution to the discrete problems are investigated in a similar way as it has been done in the continuous setting. Convergence of solutions to the discrete models in an appropriate sense is established. The method of successive approximations is used for nding xed-points. Each iterative step leads to a contact problem with given friction and a coeficient of friction which does not depend on the solution. We introduce a mixed variational formulation of this problem from which the dual formulation used in computations can be derived. Numerical results of model examples are presented.