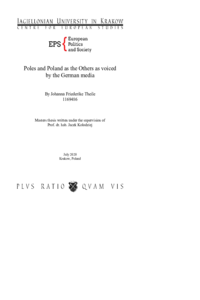 In the present work, the changing discourse in Germany about Poland is examined, with the aim to reveal reasons for political and societal conflicts between them. In order to do this, two periods of three weeks each in main German print media are examined. The discourse is analysed on the basis of the concepts Othering and Belonging, which are in the following considered to be opposite concepts (see Barkey, 2018). Othering is a concept stemming from the works of different philosophers, like Husserl (1960) who discusses how the other is perceived, or Hegel (2012) who argues that the self needs the other in order to define itself. The concept gained relevance as it was helpful to describe and analyse discrimination (de Beauvoir, 2011; Said, 1978). It is the social process of identifying an opposite as not belonging to the self, which is seen as the basis for racism or female oppression, and their partially dreadful consequences (see Brons, 2015; Hegel, 2012; Powell & Menendian, 2015). Examples for the terrible realisation of Othering can be found in the German-Polish history, such as the horrific crimes against Polish people based on the German belief of racial superiority during the Second World War. Powered by TCPDF (www.tcpdf.org)