Humor as a Mirror of Political Reality: Anti-Communist humor in the Soviet Union and Czechoslovakia in comparative perspective 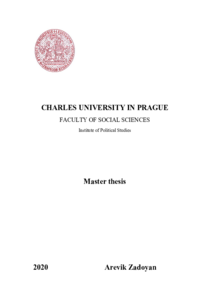 Humor as a Mirror of Political Reality: Anti-Communist humor in the Soviet Union and Czechoslovakia in comparative perspective Author: Arevik Zadoyan Supervisor: Janusz Salamon, Ph.D. Academic Year: 2019/2020 Abstract Humor is an important part of our daily lives though sometimes it is overlooked by historians and those studying politics. This thesis explores anti-communist jokes in the Soviet Union and Czechoslovakia in order to answer the question of whether or not humor is able to accurately mirror the political reality of a given country. After an extensive research, this thesis supports the argument that political humor in the Soviet Union and Czechoslovakia provided an accurate description of the regime, meaning jokes were not only meant to humor the audience but they were also informative and touched upon questions such as foreign policies, domestic life, ethnic and religious issues, personality cults of their leaders, propaganda and censorship, and much more. But even though both countries had anti-communist jokes, some characteristics (e.g., context, form, length) varied. Furthermore, since jokes are time specific, the pattern of differentiation is also present chronologically.