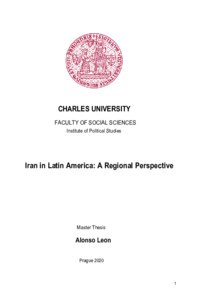 Iran's growing influence in Latin America has come as a surprise for many. Iran's diplomatic, commercial, and even cultural presence expanded steadily in the past two decades. While the subject is often discussed from a US-centric perspective, the political elements of the regional countries engaging with Iran are frequently overlooked. Additionally, a widespread belief suggests that Iran's success in Latin America is inherently linked to radical left-leaning governments. Hence, this work aims to analyze Iran's activity from a Latin American perspective and tries to elucidate if Iran's success can be sustained in times of political changes. Moreover, Brazil, Argentina, and Venezuela had distinctive political, financial, and historical reasons to increase -or decrease- their interaction with Tehran, which goes beyond the political leaning of a respective government. However, each chose a different approach when dealing with Iran. Keywords Brazil, Argentina, Venezuela, Iran Foreign Policy, Hezbollah, AMIA, Lula da Silva, Kirchner, Chavez