Football club supporters and the self-determination processes: The political behavior of supporters of the major football clubs in Scotland and Catalonia 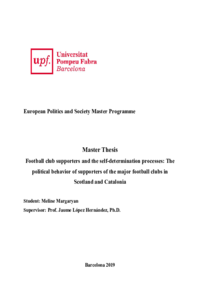 The popularity of sport, in particular football has transformed it into a strong means that is widely utilized by politics nowadays. Hence, the influence of football club's identities and values on the political vote of their supporters should never be neglected. The aim of the current paper is to study the influence of four major clubs in self-determination processes in Scotland and Catalonia in the times of the referenda for independence in 2014 and 2017. The study takes a qualitative approach to the matter and analyzes the way clubs' identities and values affect the political vote of their supporters. The paper takes an unobserved field of research, by merging the factors of football clubs' support and fan culture with its possible significance on the political arena, as well as on the fate of submerged nations' independence movements. Powered by TCPDF (www.tcpdf.org)