The Ideological Enemy Within: How Viktor Orbán's Hungary Fell Out of Democracy as a Member State of the European Union 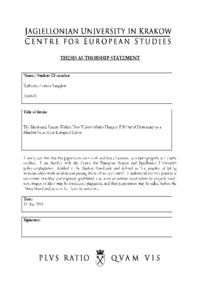 This study will more than simply echo the works of some scholars, notably Jan-Werner Müller (2018a &amp; 2018b) and Bálint Magyar (2016), who assert that Hungary has fallen out of democracy altogether; it will attest to the existence of a fundamentally anti-liberal ideology that has been often overlooked as a cause of Hungary's backsliding and as a flaw in EU accession theory. Authoritarian movements will not be stopped unless they are first properly understood and recognized for their true nature. At a time when an influx of far-right (and far-left) populist movements are challenging the EU's integrity as a bastion of liberalism, it is important to analyze a case like Hungary's in order to better combat and prevent the spread of illiberal, authoritarian ideologies to other member states. Powered by TCPDF (www.tcpdf.org)