The perpetuation of Frozen Conflicts by De Facto States to gain International Recognition: Case Studies of Transnistria and Somaliland. 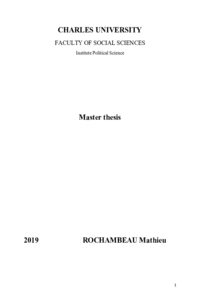 This thesis has for major aim to present the de facto state through another approach, by placing their intrinsic frozen conflict situation as a rational choice rather than a symptom of the lack of recognition. To do so, the case studies of Transnistria and Somaliland have been chosen since, the de facto state's academic field had, so far, focus more on the Caucasus' cases - therefore lack of similar comparisons. It appears indeed that, both these cases possess numerous similarities - such as not basing their identity on ethnicity or religion. Thus, through an empirical research, it has been possible to approach the establishment of these two de facto states and the reason behind the lack of international recognition; but also the role and influence of the frozen conflict within their internal evolution as well as their role in its perpetuation; and finally, the place of their parent state and the international community in the continuation of the status quo. It seems thus that, if it remains unlikely to find out if Somaliland and Transnistria do use the frozen conflict as a political tool to reach their political goals - namely international recognition but also identity building -, it appears that all actors involved in these conflicts do benefit from the perpetuation of such status quo.