Female rituals in ancient Greece from the viewpoint of modern interpretations 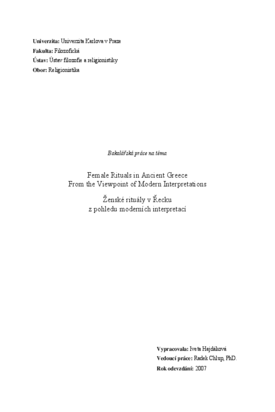 Institute of Philosophy and Religious Studies

This thesis looks at two women's rituals practiced in Ancient Greece - the Thesmophoria and the Adonia - and their interpretations by Marcel Detienne, Hendrik S. Versnel, John J. Winkler and Barbara E. Goff. The aim of the thesis is to analyze their four methods of interpretation of the rituals and illuminate how they fit within the context of contemporary debates between structuralism and post-structuralism, and ideology and agency. The paper illustrates how the various methods of interpretation - if approached critically - may be found valuable for the analysis of ideology and suggests new approaches to studies of Greek women's rituals and of the process, in which gender ideology is produced in the rituals. The interpretations should also offer an insight into the manner in which the rituals addressed Greek women on the issues of their fertility, sexuality, and their position within the patriarchal society. The thesis is divided into two parts: the first part deals with particular interpretations of the four scholars; the second one attempts to analyze their methodological approaches focusing on their assumptions and conclusions.